BioStar 2 - How to configure trigger and action

BioStar 2 - How to configure trigger and action

Below is the full list of events that are available for triggers on the setting menu.Available events for Device:

Supervised Input is used with a DM20. Please refer to DM-20 Wiring Examples for more information.

Setting Up a Custom Signal Output

In the scenario below, we will send a custom signal from our A2 when there is a forced open event. 1. Click Setting > TRIGGER & ACTION.

3. Enter a name for this trigger on the Name textbox. 4. Click on the schedule drop box. Click + Add Schedule. If you have a preconfigured schedule, you can use that one by selecting it.

5. Configure the schedule as necessary and click Ok. In this case, I would like the trigger to be on all day except for Sunday.

6. Now select the newly created schedule on the Schedule drop box. 7. Select the Door radio button. 8. Select the door this will affect. The A2 is installed on Door 3 in this example. 9. Check Forced door opened. 10. Select your device (A2). 11. Relay 0 is already used for the door lock so relay 1 will be used for the output.

15.Click on the Signal drop box and select the signal you just created and click Apply. 16. Now when there is a forced door open event, the custom signal is sent to relay 1.

Setting Up an Email Alert on BioStar

4. Click on the Gear icon on the action tab to setup your email.

5. Set up your SMTP. If you are not sure what the settings are, please ask your IT administrator.

8. The administrator will receive an alert email. 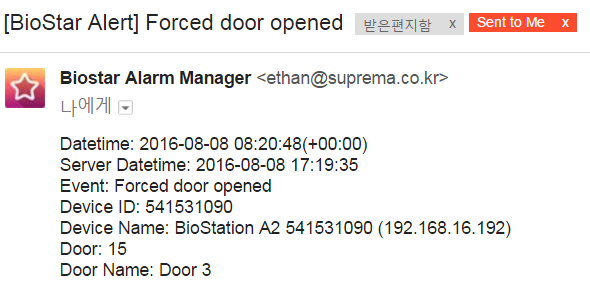